Whilst Lismore and the Richmond River region has been settled by Europeans for almost two centuries now, the area has been home to the Bundjalung peoples for thousands of years.  Europeans first documented the region on 15 May 1770 when the coastline in the vicinity of Evans Head was mapped and described by Lieutenant James Cook on HMS Endeavour. The European history of settlement in the region began in 1842 when cedar getters moving northwards penetrated the rivers and forests of the Richmond. Shortly after this time, pastoralists from the New England tableland area began to take up runs in the area. The Richmond River provided access and led to the founding of Lismore at the furthest navigable section of the river system for ocean-going vessels. The first century of European settlement saw timber-cutters and cattle grazers followed by pioneering dairy farmers. Later settlers came from all over the globe, drawn by the natural resources, the climate, the landscape, and Lismore’s growth as a regional centre.

Check out the Timeline for some key dates in Lismore’s history. 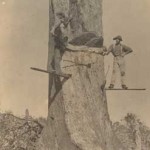 Timber felling on the Richmond

It's a great time to visit the Lismore Museum and Research rooms. Very helpful volunteers are waiting to help you. Open Mon-Wed 10-2 and also Friday. www.visitlismore.com.au/member/Lismore+Historical+Society+and+Museum/485
... See MoreSee Less