Lismore is the central city of the Richmond River region of north-eastern NSW, which extends from the head of the river in the shadow of Mt Lindesay to the mouth at Ballina.  It is situated on the Wilsons River, formerly known as the North Arm of the Richmond. The region encompasses the former Big Scrub area east of Lismore, national parks, grazing and farming country, as well as cities, towns and villages with a population of 140 000.

Aboriginal people arrived in this area about 60,000 years ago.  European exploration of the area started in 1828 but white history did not begin until the late 1830s and early 1840s with the arrival of squatters and cedar cutters.

The story of the growth of Lismore and the region is a fascinating one, from the early days of settlement and its flourishing as an agricultural centre through to the arrival of the counterculture movement of the 1970s and the importance of new service industries such as health and tertiary education.

You can find out more in the pages of this section. 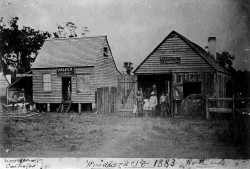 Our year is at an end, closing midday 15 December and reopening Mon 17th January 2022. Wishing all of our supporters, volunteers and members a bright and Happy Xmas and New Year!
... See MoreSee Less

Intending to come to town tomorrow (Saturday). Finally having some visitors? Why not make a day of it and drop into the Lismore Museum. Open 10-2pm Saturdays now
... See MoreSee Less