Floods – The Human Touch by Margaret Henderson
[This was originally written as school project material for the Lismore City Council website, 2002.]

Periodic flooding has always been part of life on the Richmond River. The early cedar-getters used flooded creeks and streams to float their logs downstream to mills, or to the ships which carried them to markets in the cities. In a major flood in 1861 a large number of logs broke loose, swept down the River, and crashed through the South Beach at Ballina. The logs continued on their way to become a major shipping hazard at sea. 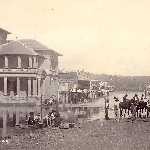 As with all disasters, however, there are the accompanying stories of courage, goodwill and humour in times of flooding. These stories are usually remembered long after the danger has passed, and many have been recorded in local newspapers.

In 1931 flood refugees were housed at the Lismore Showground. The Northern Star reported that there was a mixed crowd of about 250, together with their cats and dogs, canaries and parrots. Constable McInnes, who was stationed at North Lismore, was in charge of supplies and paid regular visits to see whether anything was needed.

On two occasions he “removed undesirables to less crowded quarters”. The Railway Station Master provided some railway carriages as sleeping quarters while some people were taken each night by goods train to a railway shed where they could sleep comfortably.

In 1945, even the World War struggles going on in the Pacific Islands and New Guinea jungles took second place to the flood. The Northern Star in those days was published in Molesworth Street, Lismore. It too was affected by the flood but managed to bring out a special flood broadsheet with contained only two or three small paragraphs of war news.

The June 1945 flood was one of the worst in the history of the Richmond. Many people were caught in their homes, especially in North Lismore. Boats were needed urgently and Police sent out an S.O.S. Ballina fishermen answered the call and, with their boats loaded on to Mick Feros’ big lorry, they rallied to the rescue. Hour after hour they rowed people to safety. Then the next day they returned with food and blankets.

In addition, in 1945 the residents of North and South Lismore were like the Ancient Mariner, when the water supply was cut off! The water pumping station had been considered out of flood reach when built. However, the floodwaters rose swiftly and it was realised that the pumps were in danger of being covered.

With the access road covered in water the supervisor, Mr Thorncroft, led his men up and over a hill to reach the pumps. It was a dangerous job as floodwaters began to pour in on the men as they struggled to dislodge the equipment. They succeeded just in time. Presumably they then retreated back over the hill again!

Food supplies in the 1945 flood had the added problem of wartime rationing. The Mayor of Lismore telegraphed the Deputy Commissioner of Food Rationing asking for special consideration under the circumstances. In the meantime he authorised NORCO to distribute butter without coupons.

Local communications became a problem when Radio 2LM lost its signal from its Molesworth Street studios. This was even more serious because the police telephones (in the police station opposite) had ceased to function. Staff at 2LM were taking police messages and shouting them across the road to the station staff!

The situation was solved when an emergency studio was set up at the Goonellabah transmission station. The Lismore telephone exchange transferred police calls to Goonellabah where they were sent on to police via radio. When setting up at Goonellabah staff tried to ease the situation by introducing themselves with the theme music “Ol’ Man River”!

It is not only people who suffer in floods. There are always many stock losses. During floods in the 1940s and 1950s stock were often seen racing down river with the current to Ballina and the open sea: pigs, cows, horses, poultry, sometimes on rafts and often with a snake or two clinging to a piece of driftwood. Brave souls tore after these poor animals and tried to rescue them, and many succeeded. At least one bull did not take too kindly to the whole operation, however, and, finding himself safely on solid ground, immediately charged his saviours!

Then there are the people who think a flood is great fun. They go swimming in the murky waters, while others go sight-seeing, blocking emergency traffic and holding up would-be rescues. Some paddle around the streets, while others tear around in motorboats not thinking that the wash from their boats can smash plate glass windows.

In 1954 and 1974 there were major floods and people coped with them as they had done in the past. And, as in the past, there were the funny stories. One of these concerned a bank whose manager prided himself on keeping up with the times. He had been advised of a new product which would completely seal the strongroom and prevent water from entering.

For once staff did not have to move all the precious items from the strongroom and, after the flood, the cleanup completed, the seal was removed and the strongroom door opened. To everyone’s astonishment (and the manager’s embarrassment) a great wave of water rushed out at them, and the cleanup had to start all over again! In addition, many hands were apparently ironing banknotes and other precious items for some time afterwards!

Yes, there is always a human touch to every flood!

Come check out our new look! We've been using our lockdown time to add some major improvements to our foyer. Opening from Monday 20th September 10am. We look forward to welcoming back our researchers and visitors.
... See MoreSee Less

Over a 100 years a go the Northern Rivers community was hit by a pandemic similar to Covid-19, they were told to wear masks but like today some people refused.